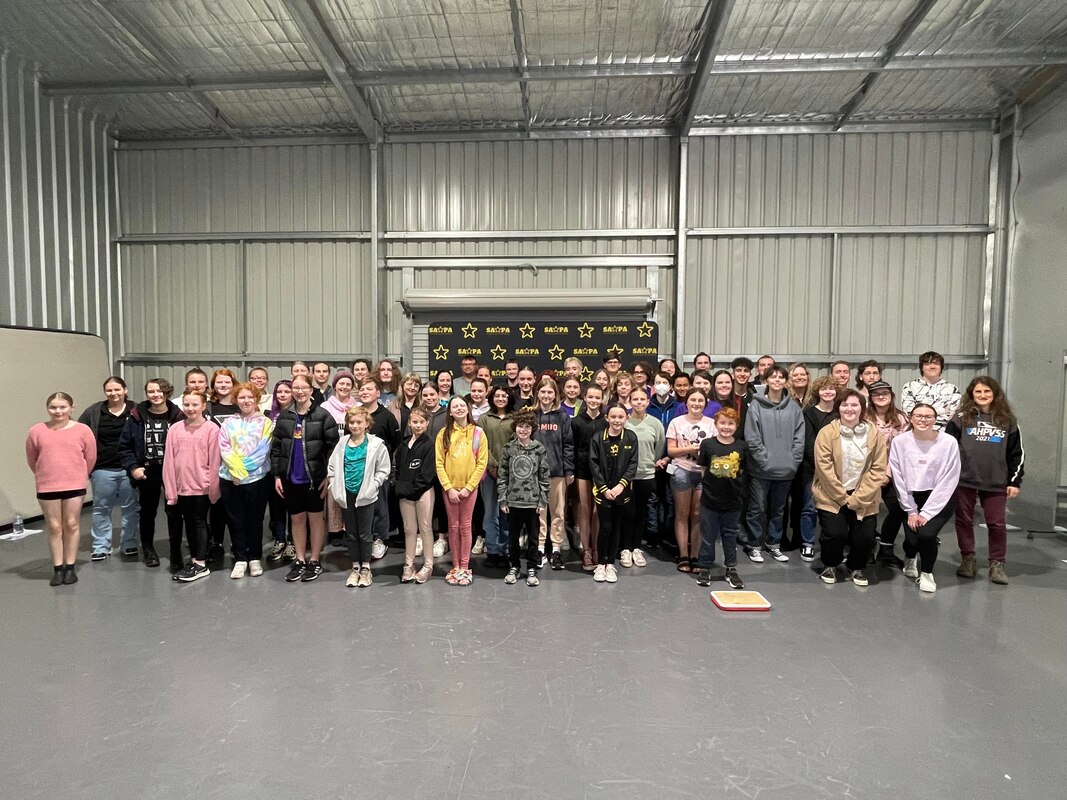 DAY ONE starts with the cast and crew meeting each other, sharing their experience of performing on stage, learning that many have never performed on stage before and some have plenty of stage time.  Rules and expectations were explained, the importance of checking your schedule and making up any missed time.

The crew then were handed out their scripts and found themselves a seat for the read through.  Taking it turns, the cast and crew spoke and sang their way through the musical.  Some great characters already coming to life!

Having a short 15 minute break, the cast returned to practicing some crowd favourite songs to finish the first rehearsal on a high.  Finally, the cast posed for their first photo.  Wow, what a big cast!

DAY TWO/THREE began with certain cast members working on their acting skills, playing with accents, running through the lines and some stage movement.
Our set and props are already coming together, with assistance from the cast and crew this show is already showing a lot of life.

Some lines and vocals have already been learnt from member which really sets the production in a great light.  Our leads came together and performed a small showcase of their main songs, switching in-between each cast.  What talent already!

​ What fun this show will be and with such an amazing cast - we can't wait to begin staging this weekend.

WEEKENDS have been full of vocal rehearsals and choreography as we begin to embark in our week long set rehearsal prior to full run throughs.
Banner has been created and posters made.  Tickets are coming in fast and we are yet to have our paid marketing tools kick off mid week.

Such a large cast, such a great orchestra and such a great crew.
​
If this main image of the crazy bunch doesn't entice you to come see the adventure, I don't know what will.

Final vocal and staging - We're in the final stages of putting the show together prior to our first full run through, with only two weeks until the show!
Excitement brews, promotional videos being created by our cast and ticket sales are well underway.

Set pieces and props are starting to really come together.  This is set to be our biggest and best yet!

FULL RUN THROUGHS  - Bringing the show together is always great fun but at times can be very messy.  But, this time around - it's been really smooth.  This is a credit to our strong and committed cast and crew.  Set pieces and some costumes begin to sneak in when rehearsing, which really helps the cast feel their character and perform at their best.

With one more large scale rehearsal with the band, we're only a few days away until we bump into the theatre for production week.

LAST FULL RUN THROUGHS - We have worked very hard over the last couple of days.  The cast a crew polish up the last couple of full runs and then found our way to the first full run with the Playford City Bands.  The first run through was very long, ensuring that the band are fully aware of all transitions between each scene and the cast are aware of particular points of music to add their individual movements.  This then led to a very smooth and flowing final run through, all set ready for the bump in tomorrow, Monday 24th October at the Shedley Theatre.  It's getting exciting.

Monday at 9am - Producer Joe Russell collects the truck from our Smithfield Studios, drives to the Shedley Theatre for Bump in!  We have a full day of bump in until 5pm with some very helpful volunteers.

Tuesday at 11.30am @ Shedley Theatre - Principle Cast for Tech Rehearsal.  We spend the day to ensure that all cast and crew are familiar and prepared for movement around the set and with audio.

Wednesday from 1pm - 9pm - the cast and crew arrive with make up and hair ready to go. They will sign in and head to dressing rooms allocated to them on the day. Dress run starts at 2pm for the Gesundheit Cast followed by the Gobstopper Cast.

Then we crack on with the shows, 7pm on Thursday, 7pm on Friday, 1pm and 7pm on Saturday!

Our production had two sell-out performances and five amazing reviews.  Take a read on our review page by clicking on the below link.